by HusariaMarketing | May 8, 2021 | Social Media Marketing 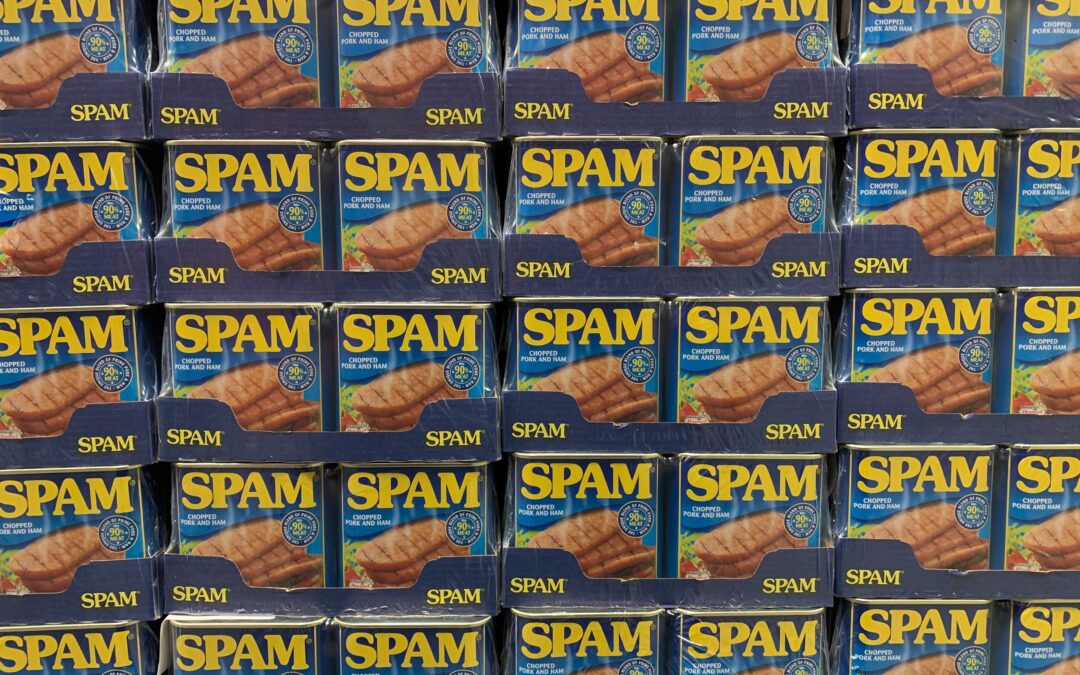 No, we’re not talking about everybody’s favorite canned lunch meat. Gas station musubis are one of Hawaii’s little gems that tourists may not know about, and you need to try one if you haven’t had the chance. We’re talking about unsolicited abuse prevalent on the internet, which first became widespread in e-mail, and has spread to instant messages, newsgroups, blogs, wikis, and social media. In many cases, these services make an effort to limit the amount of unwanted spam you are exposed to, and offer tools to help you further protect yourself. Facebook, despite appearances, is not one of those services.

In recent months, we have seen an absolute surge in the number of spam being posted to Facebook Groups. We are members of various industry and location-specific groups, both for ourselves (e.g. SEO, Search Engine Marketing, etc.) as well as niche groups for clients to share content to. You’re probably familiar with it as well, if you are a member of larger, open groups that are poorly moderated, or not at all.

Have you seen the random posts about mud fishing techniques, practical jokes, clips of Hollywood movies, or more explicit content? Often times, they will have adjusted speed or sound to fool any automatic copyright tools Facebook may be using (in particular with Hollywood movies), have subtitles explaining what’s going on, or have a person reacting to the video in the corner. If you’re in many groups, you’re probably accustomed to seeing the same videos, but they may be posted from different sources, and usually reshared by different indivudals. 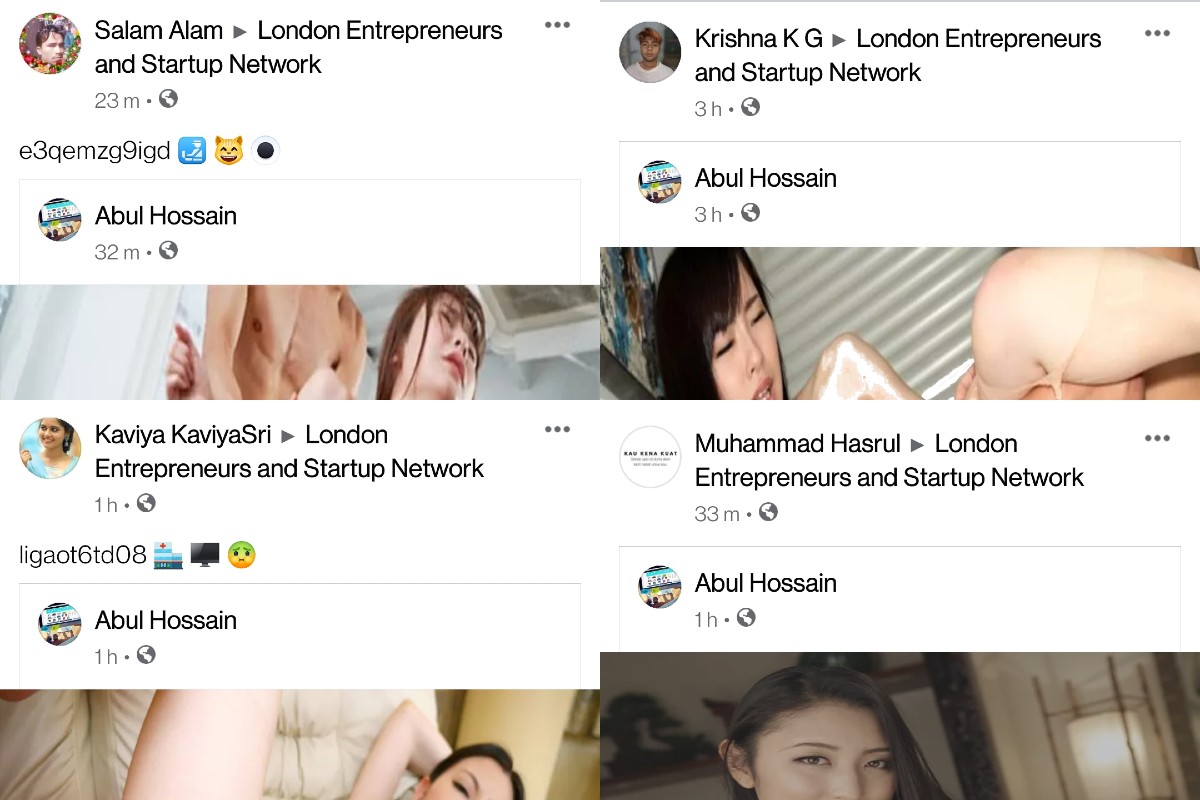 We have trimmed, or blurred, the explicit images in this report, but please be aware that they may still be suggestive. The original posts by the spammers take no such precautions, of course. Our investigation into spamming on Facebook groups, and the steps you can take to prevent or limit it, began in late February of 2021. As of May 8, 2021, after months of reporting and blocking, the spammer pages in question are still active.

Above, you can see an “Advertising Agency” on Facebook that is responsible for continuous explicit spam across multiple Facebook groups, being shared by an endless number of fake accounts. Ostensibly, Facebook gives you two options when confronted with something like this. You can hide/block the page from your timeline, and you can report the page to Facebook for violating Community Standards.

We have reported many explicit and spam accounts to Facebook dozens of times over the last two months, to no effect. These accounts have been hidden, and blocked, yet remain visible, and spammers continue to share their posts to groups we are part of.

Unfortunately in the case of many pages, our reports have gone unheeded, and we have not received a response from Facebook. In other situations we have, however, received feedback:

Here we can see an explicit post that we reported to Facebook being reviewed, and ultimately allowed, by the Facebook algorithm that is responsible for maintaining Community Standards.

Sure, algorithms aren’t perfect and can fail. We would expect that review by actual staff would not allow these kinds of posts, right?

Actually, no. Even human intervention by Facebook staff is not enough to get posts that clearly violate Community Standards removed. While we are using explicit posts to underscore the problem, these responses from Facebook staff are the norm when reporting spam of any kind.

There’s no clear answer to this question, of course. In all likelihood, it’s a combination of factors, including but not limited to:

The first two are easy enough to understand, but what about the third? Why would Facebook be disincentivized to tackle the problem of spam? Well, just like there’s fraud in the Google Display network, so to must we accept that targeting ads on Facebook is imprecise and open to abuse. In the simplest sense, however, these spammers inflate user numbers and user activity. Like fake Instagram or Twitter followers, these “users” offer no market for potential advertisers, yet can still affect our ads and the prices we pay.

Effect of Spam on Advertisers

When deciding to advertise on Facebook, one of the first things you’ll do is identify your target audience. In many cases, this can be as simple as identifying groups that cater to your selected clientele. Enter a few keywords, and you’ll be presented with groups to target your ads to. Without actually being a member of the group and monitoring the posts over time (you were gonna do that, right?), you don’t actually have any idea about the quality of the group, its content, and that of the userbase. You just see a relevant group name, and an impressive number of followers.

But if you’re a company selling parts for mountain bikes, the group shown above may not actually have the audience you’re looking for, despite the name being seemingly relevant. As an advertiser, your return on investment is critical, but other metrics like impressions and views can also matter. Padded numbers can make your advertisements seem to perform better than they actually are. After all, how much effort is Facebook putting in to make sure your ad reporting metrics are accurate and from real users? Hopefully more than they are at reviewing reported Community Standards violations.

What Can You Do To Protect Your Business?

First and foremost, vigilance. Advertisers need to be on top of not just their ad spend, but their ad locations and their results. While the Pixel is a powerful tool, Facebook’s reporting suite should not be used alone in determining the success of any given campaign. Google Analytics can give you much deeper insights on how your visitors from ads are behaving and when and what they are purchasing.

Careful monitoring and management of your paid social media marketing campaigns is crucial to making the most of your investment, and ensuring a satisfying ROI. Facebook Ads offer great opportunities for businesses to reach their clients and build visibility, but a careful approach is necessary to prevent getting burned. Facebook is more than happy to take your advertising budget, but after that, their involvement can get flaky.